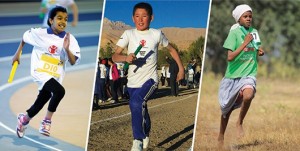 of over 30 participants will work together and run sections of 200 metres in a relay to complete the distance with a focus on beating the New World Record for the Marathon set only this weekend by Kenyan Athlete Dennis Kimetto.

Teams from across the world will compete simultaneously in both Under 13 & Open Age races with results and checkpoint being recorded at www.competitioncentre.net allowing progress to be tracked worldwide. Similarly Primary school aged participants can also get involved in the Global Race with a World 5000m Challenge available to enter.

Early results include schools from across the UK & Europe already bettering the World Record. A Team from the de Ferrers Academy in Burton on Trent has already beaten the time with 1:59:24 to lead the early rankings, while a group of teams from Norway have also completed the race with only 2 seconds between the first two teams in what can only have been a very close and exciting race. In Ireland an early race including open age club athletes has seen a team from Tullamore Harriers complete the race in 2:01.54.

Good Luck to everyone involved today and we look forward to hearing and seeing how all the races go.