The Services to Sportshall Award (previously known as the John Young Award) was reintroduced this year for coaches, volunteers, officials or indeed anybody who has contributed to the development of Sportshall Athletics.

Some strong nominations were received, and a panel chaired by George Bunner the creator of Sportshall decided three winners who were presented with their awards at the 2019 Sportshall UK Final over the weekend of April 13th and 14th.

George was in attendance to present the awards to our first two recipients on Saturday 13th April. Dave Turner who acts as Sportshall Athletics County Coordinator in Avon was the first to receive his award on the Saturday and was a worthy winner. 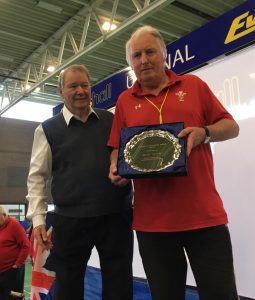 Dave (pictured receiving his award from George Bunner) has been involved with Sportshall athletics since 1984 when Dave Travis first introduced the sport through Sun Life Sportschool. He has overseen County Sportshall events ever since, supporting the 4 district authority competitions for schools, providing equipment as well as running many events including the County Championships each year.

Dave spends hours analysing results and selects the best available youngsters from the County which has resulted in the Counties Under 13 Boys teams winning the UK title 9 times. Dave has been the Team manager for all of these successful teams and continues to bring great teams through the system.

After receiving his award at the start of the day Dave, alongside his wife Sue led the Under 13 boys to second place at this years UK Final; again another great result for Avon only a few points behind the winning team from Surrey. 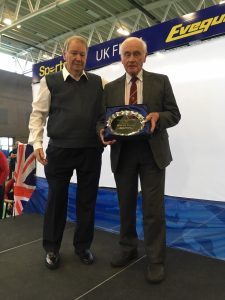 Heddyd Davies (Pictured with George Bunner) has been instrumental in the development of Sportshall Athletcs in Wales and especially within the County of Dyfed was next up to collect his award from George.

Following a demonstration event in 1992 from George Bunner in Carmarthen, Heddyd has organised an annual series of three indoor Sportshall Athletics events at Carmarthen Leisure Centre (two at secondary school level for years 7 & 8 and years 9 & 10 and one at primary school). In addition, he has selected and organised Dyfed secondary schools to compete in the Welsh National Final.

Over the years, many Dyfed teams have won at the Welsh final and progressed to represent Wales at the UK Final. Only in 2016, Dyfed athlete Radix Mularwarman was crowned the individual UK All Rounder UK Champion; a great result for Radix and Heddyd.

The final award was presented on Sunday 14th April and we were delighted to welcome Brian Holyfield to Manchester to receive his award for his services to Sportshall. 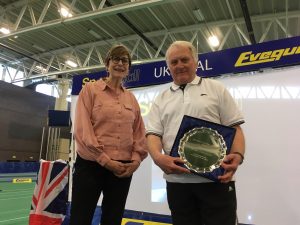 Brian champions Sportshall Across Birmingham and the West Midlands and over many years has been involved as a coach, team manager, official and as a committee member in the very successful Birmingham league.

The hard work and dedication of Brian who commits hours of his time to support the activities and administration has been shown over the years with many successful teams and individuals coming from Birmingham at the West Midland Regional Finals and the UK Final too. This was also shown this year on the day with Rhiana Burrell of Birmingham winning the UK Final in the Under 15 girls shot.

Kim Pickering, the President of the Sportshall Athletics association proudly presented Brian with his award during Sunday’s opening ceremony.