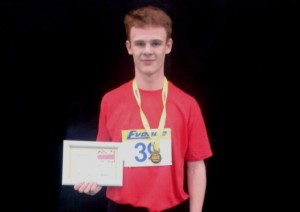 Our 2014 UK finals were held for the first time in Manchester and we saw some excellent competition and brilliant results over the first weekend in April. Our under 15 individual competitions were particularly competitive.

After finishing 7th in 2013, our 2014 boys’ title was collected by Ashley Cooper (City of Norwich AC, Norfolk). Keeping the title in Norfolk after it was won in 2013 by Jack Dearden of the same club, Ashley performed consistently well in all his events in Manchester and won our all-rounder title.

Since winning the UK Final boys title in April Ashley has had a successful season on the track and in the field with his best results coming in the Long Jump. Ashley is currently ranked a very creditable 13th in the UK long jump for his age amongst other high ranked performances across sprints & jumps. 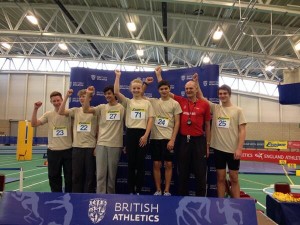 Ellie Hodgson (Southampton AC, Hampshire) won our girls title in Manchester in April in her first year in the age group. A remarkable performance in a close competition Ellie beat Katie Rowe (Derbyshire) by only 2 points.

Ellie’s performances this summer have seen continued success with her biggest success in throws where she earned a Silver Medal in the Shot at the English Schools Athletics National Championships in July. Ellie has also picked up numerous medals and titles in Sprints over the summer and we look forward to seeing how Ellie progress as she moves up to her final year as an Under 15.

Sportshall County Leagues are getting underway during September & October so get involved at your club and you could be following in the footsteps of Ellie & Ashley!