The Under 13 athletes arrived at the Regional Athletics Arena in Manchester from across the UK having qualified as winners of their respective regional finals. Cheshire (boys) and Leicestershire (girls) also qualified as the closest runners up.

After the traditional parade of athletes and welcome from George Bunner, the creator of Sportshall Athletics, the young athletes were treated to a Q&A with local athlete Abi Pawlett (Stockport) the new Under 17’s British Record Holder in the Indoor Combined Events Pentathlon. Amber Anning (Brighton & Hove) the Sportshall Under 15 Girls All Rounder Champion (2016) who recently medalled in the Indoor European championships also kindly sent up a video message for those young athletes present. 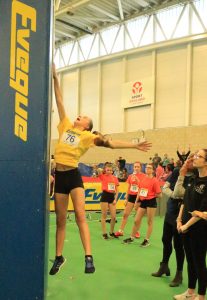 After the inspirational opening ceremony the action was underway. As has become a staple part to Sportshall UK Championship competitions the first races of the day were the Obstacle relays which were as exciting as ever seeing Norfolk earn maximum points after the girls time trials with Surrey running the fastest time in the boys competition.  More competitive races followed on the track where the athletes fought hard to score points for their teams.

In the girls competition Annabel Ammadin of Greater Manchester (Sale Harriers) used her home advantage to improve the 10.95 throw recorded at the North West Regional events to 11.64m winning the competition in the final round ahead of Lucy Oakley of Norfolk.

After great team efforts and outstanding performances across the day the team winners in the girl’s competition were Norfolk ahead of Berkshire by only 7 points. The girls showed great strength as a team throughout the day by winning no less than 5 medals in individual events in addition to podium places in almost all the relays.

Having missed out on the title in 2018 by a small margin Surrey’s boys team came back with a renewed determination and were crowned Under 13 boys UK Champions for 2019. It was a really competitive day for the boys during which the Surrey team collected no less than 6 individual medals. As a team, and except for the 8 lap paarlauf the boys from Surrey also picked up medals in all the relays.

Sunday 14th April saw the Under 15’s arrive in Manchester ready to put their practice into action on the track and in the field at the Manchester Regional Arena. The qualifying teams, as with the Under 13’s on Saturday were paraded in front of the Manchester crowd as part of the opening ceremony before the action got underway.

In the girls competition Greater Manchester athlete Halle Ferguson (Trafford AC) stepped up her game to win the All Rounder title having only finished fifth in the North West Regional Finals back in March. Halle won the standing long jump with a jump of 2.53 in the final round, threw a huge personal best in the shot to finish 8th with 9.19m in the second round and recorded a time of 20.7 to take the silver medal in the 2 lap race behind Lili Fern of Devon (City of Plymouth).

Niyah Costley spearheaded the Surrey girls team charge to win the individual silver medal in the All Rounder competition ahead of third placed Rhiana Burrell of Birmingham. Rhiana became the UK champion in the Shot with a throw of 11.83 having qualified as an individual from Birmingham following the Regional Finals. 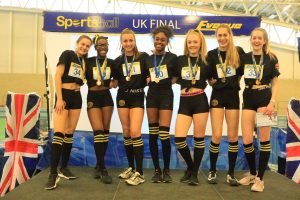 The girls from Surrey collected 5 medals between them with an additional 7 top 10 results.  Niyah collected a gold medal to become the UK Champion in the Vertical Jump with a strong performance of 67 to beat Lateefah Agberemi of Buckinghamshire (Marshall Milton Keynes); reversing the result from the South East Regional finals. Nicole was equal second picking up a silver medal in the Standing Long Jump alongside Elanor who also collected the bronze in Speed Bounce. Sophie also took an equal bronze having performed 86 in the speed bounce too, a well-deserved win for Surrey who showed grit and determination and a fantastic team ethic throughout the day.

In the Boys competition the all-rounder champion in only his first year in the age group was Mason Owusu-Dellimore (Surrey, South London) collecting gold in the 4 lap race with 40.1, silver in the Standing Long Jump with 2,84 only 2cm behind Jerel Livingston (Greater Manchester, Trafford AC). Mason also threw 11.59 in the shot to finish 8th in a strong competition won by Gabriel Ball (Warwickshire, Leamington Athletics Academy) with 14.70m.

The strength of the South East was really shown once again this year with Surrey earning the runners up spot and the title going to Berkshire’s Under 15 boys team of Ben Britton (Bracknell AC), Trey Bennett (Slough Juniors), Jonty Curtis (Bracknell AC), Gregory Menkiti (Slough Juniors), Harry Booker (Team Kennet) and Oliver Gregory (Team Kennet). What an incredible result for Berkshire who only qualified as closest runners up after being beaten into second place by Surrey at the South East regional finals.