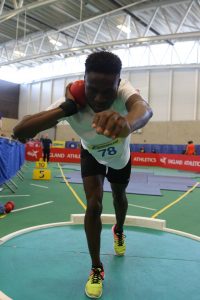 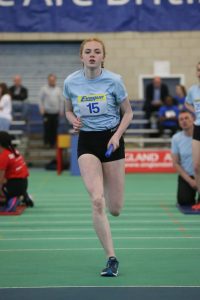 Sportshall Associates are delighted to announce that both 2017 All Rounder Champions Theo Adesina and Emily Tyrell will act as Sportshall Ambassadors for the forthcoming season. The roles are being handed over from previous All Rounder winners Radix Mulawarman and Amber Anning.

Our latest UK Final Under 15 All Rounder Champions will both act as role models at forthcoming Sportshall Schools and UK Championship events, presenting awards and inspiring young athletes to follow in their footsteps. Amber in particular was a huge help across last season – attending a variety of events including Schools, Regional and UK Finals.

Qualifying from the East Regional Final as the All Rounder Champion where he captained the Essex team Theo demonstrated consistently strong performances to edge Charlie Williams (Norfolk) and Harvey Darroch (Merseyside) into second and third place respectively.

As a member of Thurrock Harriers AC Theo, now competing in the U17 age group continues to compete in Multi-Events and currently sits second in the Power of 10 Long Jump rankings.

Emily progressed to the UK Final as the South West All Rounder Champion accompanying her Devon team after a close Regional Final competition.

Emily came joint first in the 2 Lap, with Sportcitys slightly shorter track always leading to exciting, close fought races. She backed this up with another Gold Standing Long Jump performance (2m62) and 8th place in the Shot (9m55).

As well as securing the UK Final All Rounder competition, Emily’s points tally helped Devon to finish in a creditable 4th place following up on their second place finish in the same age group from 2016.

Still competing for North Devon AC with her coach Gill St Barbe, Emily is currently ranked 9th in the U17 Power of 10 Long Jump.

Whilst both Theo and Emily go from strength to strength on the Track we look forward to welcoming them at upcoming events to aid us in spurring the next generation on to do their best and ultimately enjoy Athletics!